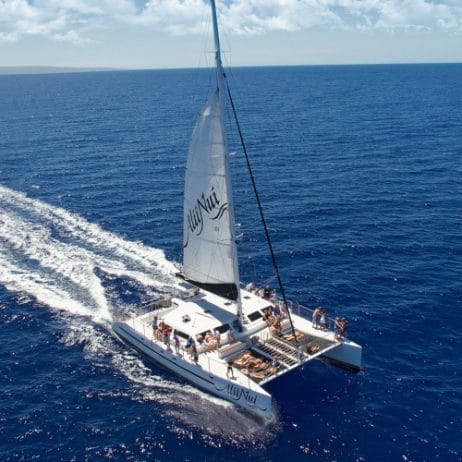 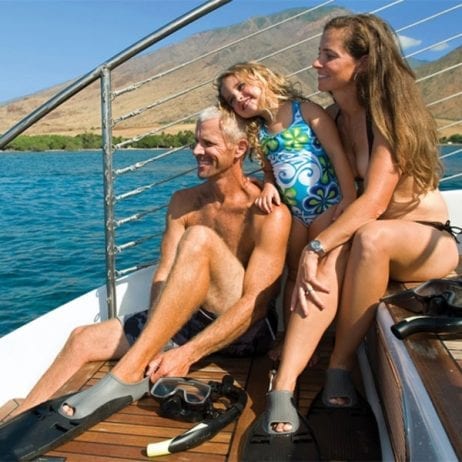 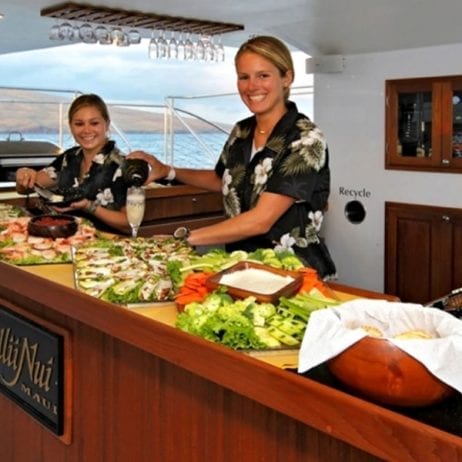 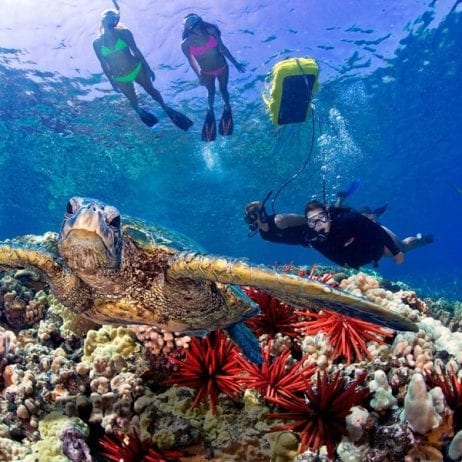 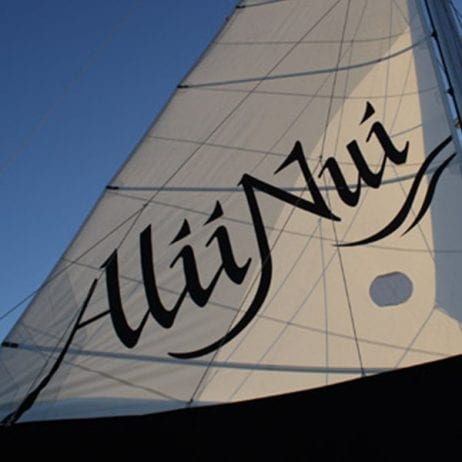 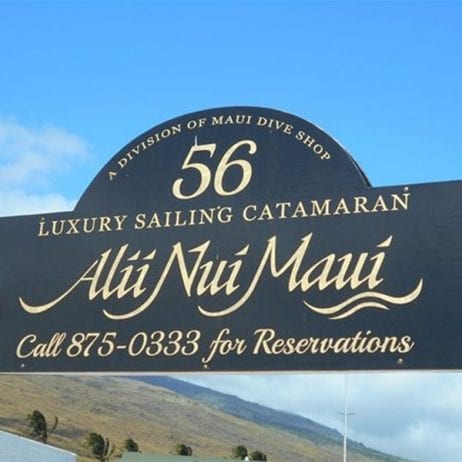 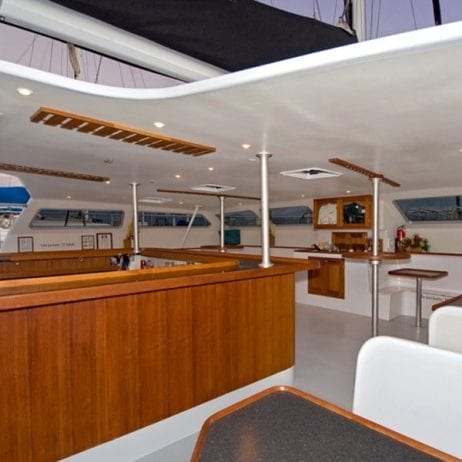 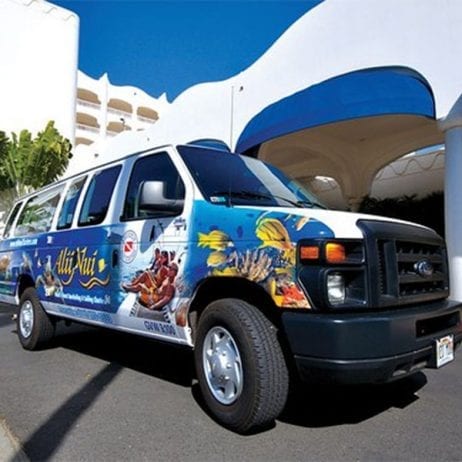 The Alii Nui is easily the most luxurious snorkeling and sailing cruise you will ever experience on Maui or anywhere else for that matter. With small groups and attention to every detail you can imagine, the Alii Nui sets the standard for snorkeling in Hawaii. Depending on ocean conditions, the Alii Nui visits Molokini and/or Turtle Point. At each snorkel site you will be impressed with the vibrant reefs and colorful marine life, not to mention the abundance of sea turtles. Top of the line snorkeling gear is included. An amazing breakfast buffet rivaled only by the 4 star resorts is also included. An equally amazing lunch is provided when you’re hungry after snorkeling. Maui Brewing Company beer, Mai Tai’s, Moscow Mules…The Alii Nui has thought of everything!
Once you spend the morning on the Alii Nui, you will feel any worries from the mainland completely disappear.

Every detail has been thought of and perfected by the Alii Nui. They have it All!  The menus created by the Alii Nui are so far above what other charters offer. The meals are impressive, to say the least. The Alii Nui has the best menu in Maui for any snorkel trip.

The Highest of Royalty – Alii Nui

The Alii Nui is a custom-built luxury sailing catamaran. The boat is 65 feet long and 36 feet wide.
With a spacious main cabin featuring 8 tables, there is plenty of room to relax and enjoy your Maui snorkeling trip. The crew is first class; there to pamper your every desire.

The Alii Nui provides top of the line snorkel gear, boogie boards, water noodles, wetsuits and optical masks. Alii Nui also provides large terry towels for after snorkeling. Everything is included with your tickets.
After snorkeling, you can rinse off the salt water with a hot water shower.

Huka Diving:
Huka diving is like Snuba. An oxygen tank is placed on a small raft with a 20-foot hose attached to your snorkel. With a weight belt added to you, swimming under the water for about 35 minutes is a blast. The groups are small with only 4 to a group along with a dive master. Huka is a great way to take advantage of snorkeling at Molokini or Turtle Point presenting a new look to snorkeling.

Alii Nui is sponsored by Maui Dive Shop. Known mostly as a retail outlet that rents and sells snorkel gear, Maui Dive Shop was born as a small store in 1978 located at the Maui Mall in Kahului by Bob Chambers. It was a small shop that catered to locals and tourist. After years of struggling Mr. Chambers moved the store to Azeka Plaza in Kihei. This move put Maui Dive Shop closer to the visitor industry, which changed the course of history for Maui Dive Shop.

Tip of the Day:
Bring a towel & sunscreen

Restrictions:
You must be at least 8 years old to Huka
Intro Diver are not allowed to dive at Molokini. Your dive will be at the second snorkel location.

Meals:
Meals and beverage aboard the Alii Nui are in a league of their own. I am totally sold on just eating and drinking, let alone the snorkeling!

A valid photo ID is required to consume alcohol

Check in 30 minutes prior to activity start time.

Molokini as a snorkel destination is at the discretion of the captain. The captain may select another snorkel site during inclement weather.

Russ C.
Without a doubt, the best excursion for my money. I was able to scuba dive, my kids were able to "snuba"/ "hula" dive and my wife was able to snorkel. We...

Christiana S.
WOW! This made the trip to Hawaii spectacular! We went huka diving, snorkeling, and whale watching. The whole staff was friendly (you could tell they loved...

Edward S.
We booked and took the Sunset Yacht cruise. It was an amazing experience and great value, which included an open bar, delicious multi-course dinner, and...

Al S.
Our experience on this boat was amazing! Everyone was so kind, helpful, and professional. The captain, Jamey, was great and it was a very smooth sail. The...

Zach F.
Great customer service. Worked with my wife and I during COVID to give us the best experience possible. Couldn't recommend them more.

Molly S.
MUST READ THIS TIP!!! Get on the boat early and get a table at the front of the boat on the top area so you can eat dinner and watch the sunset. Here is my...

Matt S.
This is a review from last year prior to the Kung flu fever. Staff was excellent, charter was on time, and the destination was beautiful. My only critique...

Chris K.
Wow! What an unforgettable day! What a fun, professional crew! What amazing food! Today we had the privilege of sailing the ocean for a snorkeling tour...

Al M.
Whales, whales and more whales! February is the perfect month to go on a whale-watching cruise on Maui before they start to migrate toward Alaska as the...

Brian L.
Alii Nui will always be a special boat for my wife and I as it is where I proposed to her a few years ago. The following year, we chose to attend the sunset...

Matt M.
EPIC Whale Watching Trip! We recently did a whale watching trip and it was truly and amazing day out on the water. Upon arrival everyone got checked in quickly and they had an awesome lunch spread available in the cabin to enjoy before departing including ribs, cheese platter, light pasta dish, and refreshments - totally worth spending a little more for the better quality, less packed, less hassle trip!. The crew was always available during the trip to assist with taking any drink orders, answering questions about the whales, and made sure everyone was comfortable. Prior to departing the captain noted that he will always do his best to position the boat for good lighting while still remaining a respectful distance away from the whales. We took some amazing photos thanks to the captain... It was an exception day out on the water and one of the best action packed days I have seen all season and was so thankful for that! Mahalo nui Alii Nui for having us out and we can not wait until the next trip out with you guys!

Anna V.
Absolutely amazing! We went on the Molokini and Turtle Town Snorkel Tour Feb 15th. It was a little challenging to figure out how to find the slip mainly because our travel agent booked it for us and we didn’t realize they are many tour companies at the harbor. Give yourself extra time to find parking and to locate the slip. On board every single crew member was focused on making our experience the best possible. There was breakfast already out when you get on board, snacks throughout the day and lunch. The bar is always open and someone is always offering you a drink. They have towels to your hearts content. Want a new, dry towel? Already taken two, no worries there are plenty more. They have a lovely warm sprayer on deck to rinse off, rash guards in every size, noodles, everything. I forgot to tie my hair back, they had a hair tie for me. They had sun block, lotion, leave in conditioner, they think of everything. Meals are served on real plates and there is a yummy variety of fresh foods. They want you to have a great time. The snorkeling was beautiful. They have lifeguards out on the water and a photographer in scuba gear to take your photo. They include many fine touches to really make you feel pampered. If you go in February you will get the added bonus of see many whales. We got beautiful pictures and videos of the whales. I can’t think of a finer experience or a time I have ever been more impressed with service. Bring cash for a tip, believe you will want to express your appreciation. We took our 7 year old and they had the size gear for him and took extra care to make sure he had a great first snorkeling experience. You won’t regret taking this trip, once in a lifetime!!

Steve A.
One of the best on the island! Whale watch excursions come in three varieties here: big educational boats, small speedy no-frills rafts, and high-frill catamarans. Alii Nui excels in that latter category, and is a top choice on the south side of the island. Come hungry! The food is delicious, there's all you can drink, the service is great, they even clean your dirty sunglasses for you! Those small touches make a huge difference. My one request - please add iced tea to your drink menu! If you're a photographer, note that you can't use a GoPro from this type of boat because the catamaran is too high up from the water (versus a raft), but you'll have great views to shoot DSLR and iPhone images from the top decks!

C. R.
My wife and I opted for the VIP cruise and were not disappointed. This was best dinner cruise I have experienced. The service was impeccable, the crew was supremely attentive and friendly!

Edo S.
By far the very best.Our forth year in a row and counting. Great food and all you can drink and the best thing is that they pick you up and drop you off from wherever you're staying so you don't have to drink and drive. Just have fun and enjoy the most magnificent scenery and whales up close. That your only job.

Melissa L.
It has been a long while since I've signed up for a sunset cruise, but something about the air in Maui told me it was time. Our hotel selected Alii Nui...

Suzy N.
Worth every penny. The staff is outstanding. Professional and friendly. They fed us the yummiest lunch and made me the best rum and coke I have ever had. The snorkeling spot they took us to was incredible. Sea turtles everywhere. I gotta give a special shout out to Pam. Such a sweetheart. The Aloha spirit just radiated off her. Mahalo for the best day of our vacation.