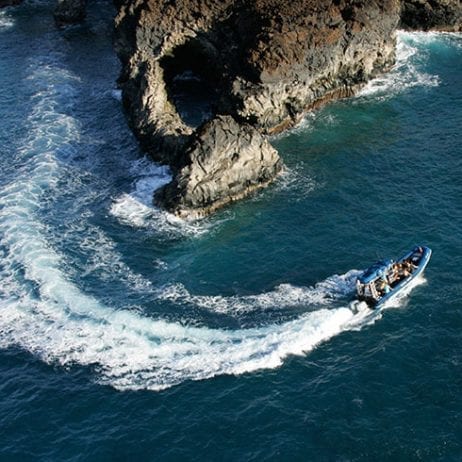 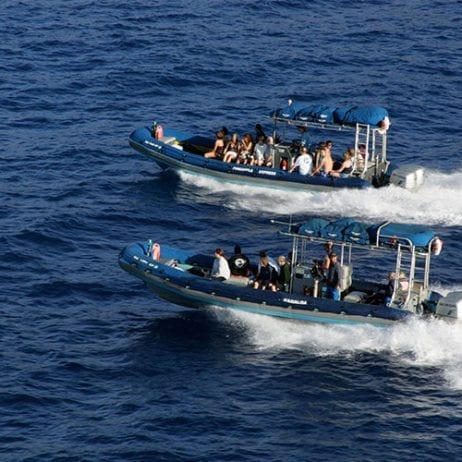 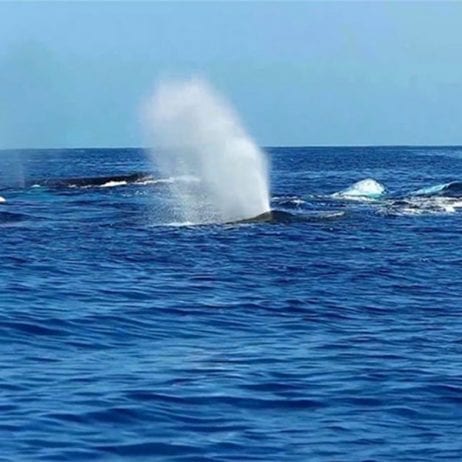 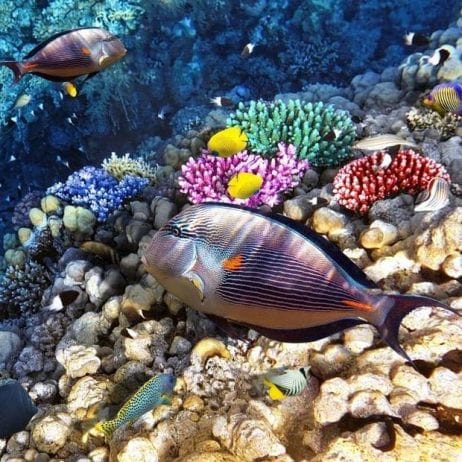 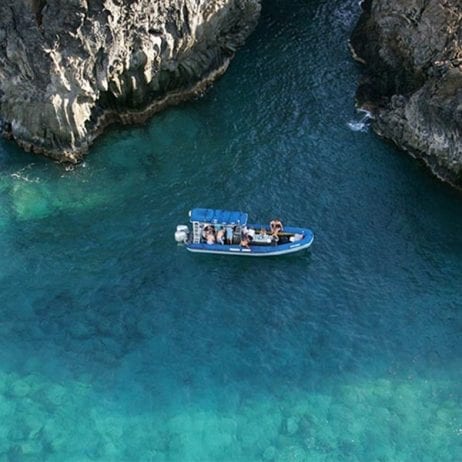 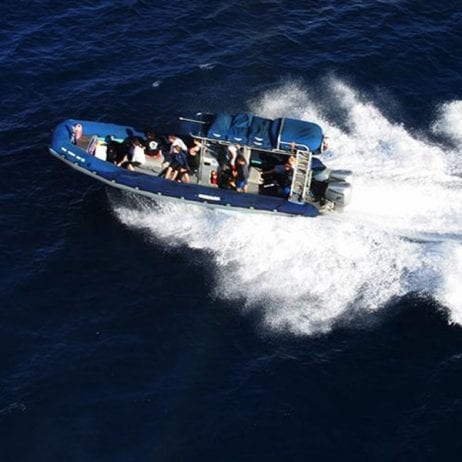 This journey to the remote Kanio Coast includes all the same features as the shorter 4-hour adventure but makes a stop at Molokini too! Enjoy the sea caves, spinner dolphins, sea turtles and all of the fascinating sights of the rugged Kanio Coast along with Molokini Crater. The last stop for the day for this tour with Blue Water Rafting is at Molokini. Most of the daily Molokini charter boats will have left the crater by the time you arrive with Blue Water Rafting which provides an un-crowded experience as you explore the wonders of Molokini Crater. This is an awesome adventure for those who enjoy snorkeling in small groups and the rush of a high-speed raft. Blue Water Rafting provides an on-board continental breakfast,  deli-style lunch complete with juice, soda, and water.

The ride down to the Kanio Coast is breathtaking. The snorkeling at these Maui snorkel sites is far superior to any other snorkel site on Maui.

The first snorkel site is along the Kanio Coast where Blue Water Rafting does what has become known as drift snorkeling. Drift snorkeling is smart snorkeling. Drift snorkeling is when the boat throws out a rope behind the boat grips it. The boat then moves forward slowly, motoring across the reef with the snorkeler moving across the area without exerting any energy. What a concept!
As a snorkeler, you will see more fish along with covering more ground and spending less energy. If you are anything like me, that’s a good thing as I’m not in any shape to spend an extended period of time in the water without feeling fatigued.

The color in the reef speaks for itself. Nowhere on Maui are the reefs so alive and teeming with marine life. Thousands of species of fish call the Kanio Coast home and they move along the reefs, busy with their life’s in a leisurely manner looking for food and basically giving the reefs a lively look. Dolphins also call the southern coast of Maui home. Bottle Nose and Spinner Dolphins swim in pods that make the waters look as if they are boiling. Continuously playing, ever smiling the dolphins of Kanio are friendly and plentiful. Imagine snorkeling and have a dolphin swim up and smile at you. I guarantee you will be amazed. The Kanio Coast is the only place on Maui this is likely to happen, so what are you waiting for. Join us today.

I have snorkeled with Blue Water Rafting on several occasions. As an agent, every ne in a while it’s a good idea to check in with different Maui activities so we can see what has changed or not. In most cases changes The revolve around the menu. With Blue Water Rafting, the adventure is the same as it always has been. Their belief is if it’s not broken, don’t fix it.  The Kanio Coast Molokini snorkel trip is one of my favorites. Small groups with only fish in the ocean. I like it that way. I know snorkeling the Kanio Coast and the backwall will always remain as it is, mainly due to the fact that Blue Water is the only charter boat company on Maui who snorkels these two areas.

Blue Water Rafting has been snorkeling Maui for over 30 years. They were the first snorkel boat on Maui to offer snorkeling tours to the Kanio Coast and the first to combine Molokini snorkeling into one tour with the Kanio Coast. The company is a small business on Maui that is family owned and operated. Snorkeling the remote southern coast of Maui is there passion. Showing snorkelers, the backwall of Molokini is special and Blue Water Rafting provides the only Molokini snorkel trip that does that.

Tip of the Day:
Bring sunscreen and a towel
No restrooms aboard.

Restrictions:
No expecting mothers
No people with bad backs no neck problems
No children under the age of 6.

The Kanio Coast and Molokini as a snorkel destinations are at the discretion of the captain. The captain may select another snorkel site during inclement weather.

Dan Q.
Went out today with Captain Shane and lifeguard/assistant Danny. The were a great! Captain Shane backed us right up to some sea caves! We saw atleast 20...

Lori H.
This was an AMAZING time and Captain Rich is the best! I asked for turtles and was thrilled to see more than EVER! This trip is a MUST do! Can't wait for...

Vivian C.
My boyfriend and I went on the kamaaina snorkeling trip with Shane and he was SO much fun! It was only us three on the boat due to Covid and shane made sure...

Brenda A.
BEST TIME EVER! I was lucky enough to get the last seat on a 6-person Express raft to snorkel Molokini and do a whale watch.First, the guides were...

Nicolas P.
Great expirience and fun crew! The smorkeling was great and we saw several whales on the way

Nikitha R.
You guys made our day. It was such a fun trip. We were in the right time to watch the whales and the weather was so perfect to snorkel in the Molokini island.

Amy J.
We did this whale watching boat ride on Maui! Mark the owner was our captain and his jokes were fantastic. Very laid back ride. They got us as close as we...

joan W.
Went on the whaling snorkeling trip. Excellent. Tim the captain knew where to go to see many whales. Then went and saw great rock cliffs. Snorkeling was good. Tim and Stephanie were very helpful people, could answer all our questions. Delightful morning

Neal J.
This was a fun adventure type boat tour for my wife and I's 1st trip to Maui. Saw some amazing lava coast scenery and tons of whales. Tropical fish and...

Sean D.
This experience was incredible! I booked this because it advertised smaller boats, smaller crew and a more intimate experience. Since I had never been...

Taryn K.
My family, group of 4 including myself, experienced the 4 hour tour with amazing Captain Tim! We luckily were the only family who booked the 7am-11am tour. Tim took us to see the sea caves which was such a great raft adventure! We headed over to Molokini Crater. Wow!!! Such an assortment of fish. Tim then took us over by Turtle Town where I got to swim with 5+ turtles!!!!! After we swam with fish and turtles we headed towards the direction Tim thought the dolphins may be and sure enough we saw dolphins!!!! On the way back in from such an amazing tour, Tim spotted and we got to stop for two whales!!!! Was truly a trip of a lifetime

Auto T.
Our captain, Jimmy took us expertly through some massive swells. I’ve skydived and had lots of countless adventures and I assure you this one is Absolutely fantastic. I laughed my face off multiple times. Now that I was faceless it was somewhat harder to enjoy the gorgeous coral, school of fishes, spinner dolphins and turtles. I Persevered and even managed to inhale more than my share of delicious lunch sandwiches as no one else was apparently hungry. As it’s likely your world view will change, not for the timid. Do recommend.

Sarah G.
Awesome tour and guides. Took the time to show us awesome lava formations, Molokini (including the backside) and even made sure we were able to see quite a few whales!!