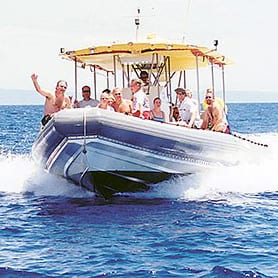 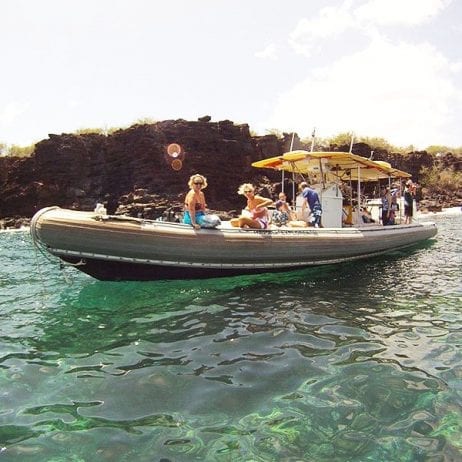 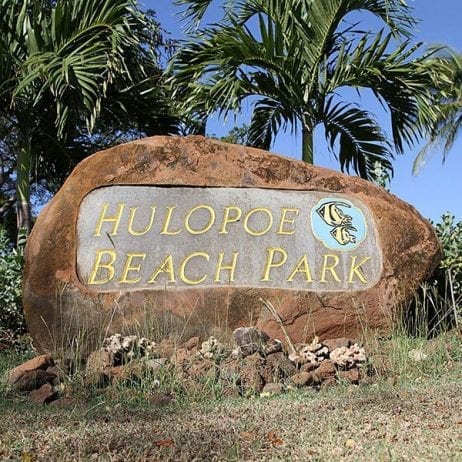 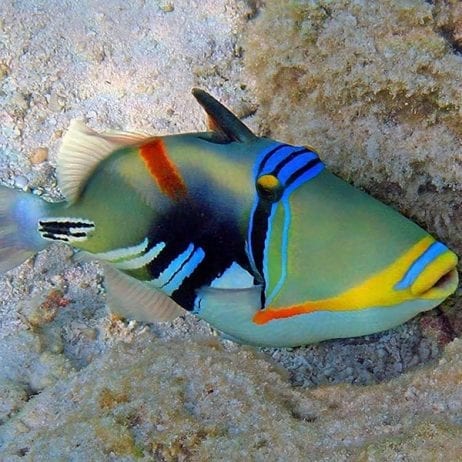 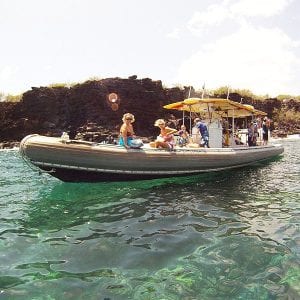 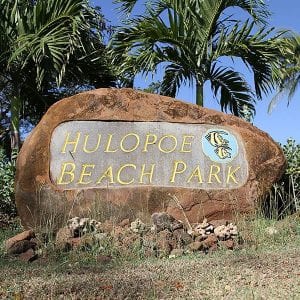 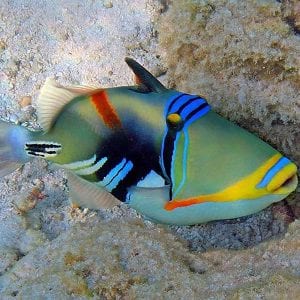 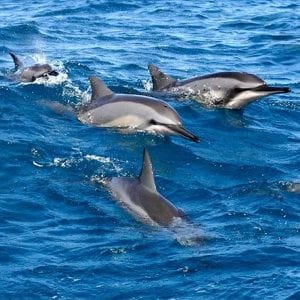 The second snorkel site on Lanai is Manele Bay. Manele Bay is a marine reserve. Out of every snorkel tour on Maui that I have experienced, snorkeling at Manele Bay is by far the best. The Maui Nui Explorer moors closer to the left cliffs, just before the reef. You don’t have to swim much to reach the reef. There are some little sea caves under the water that are bristling with fish and coral formations. The coral reefs rise from the bottom like termite mounds colored with every shade of a rainbow. The amount of marine life present is staggering. Some swim in schools with up to a hundred-fish banding together to form the school. Others are as big as football, and some are small like aquarium fish. The san pockets between the formations of coral have fish hanging out eating the algae. You can actually dive down to the bottom and touch the sand pockets. It’s not very deep. The closer you get to the edge, the more Manele Bay comes alive. I have always thought of Manele Bay as a National Geographic snorkel spot. It’s that amazing.

Restrictions:
No children under 4
No expecting mothers
No people with bad backs
No handicap access

Maui Adventure Cruises
4.5
Based on 160 reviews

Ryan S.
We had a fantastic snorkel trip to Lanai with captain Zac and Alison. We arrived at slip 11 and were given a lunch bag which contained a wrap sandwich,...

Russel R.
Words can't explain this trip! Did not expect to get/see as much as I we did! Recommend this trip if your in Maui, would come back. Amazing tour guide!

Rachel T.
This trip was awesome! We did the 4.5 hour snorkeling tour that included 3 stops: 2 coves and 1 harbor area that was packed with sea turtles. We came...

David T.
Awesome captain and co-leader (Jay and Meredith). We had a large group with kids and they made everyone comfortable, were extremely patient and very...

Chris S.
The perfect "brochure" trip! I have done 6 different boat snorkeling trips in my various trips to Hawaii over the last 11 years. What was my former best...

Mat H.
We had a great time! The best snorkeling trip we have taken in Maui by far. Captain Kerry(sp) and First Mate Jack were great guides and we saw dolphins,...

William P.
We had an amazing time with Captain Kiwi (I think that was this name) and Justin. They were both professional and courteous. These two know what they're...

Zoe A.
Amazing!!! We went out on a boat and saw all the whales! Staff was fun and informative and answered all questions! We saw so many whales today and had such...

Lloyd C.
I enjoyed this boat trip. It's about a couple hours long and yes you will see whales guaranteed by the boat company.The thing is you have to be ready to...

Lori G.
SPECTACULAR! We went on a morning whale watching tour. The captain and his first mate were so knowledgeable. We learned so much which we so appreciated for...

Kylie M.
CHOOSE THIS ONE! How do you know which boat tour to get on? They all look the same! But every time I go on Maui Adventure Cruises (because they're the...

Christian P.
An absolute MUST DO. Sure others might be less expensive but there is no comparing the quality of this day! Capt. Kerry is a sea life whisperer....we...

Girish G.
We were able to watch a baby and mother whale for a good amount of time, with lot of interesting behaviors.We also saw a pod of spotted dolphins and lot...

Luvlee L.
What a great experience! Captain Casey and Shannon were phenomenal tour guides and extremely knowledgeable. We've done lots of excursions and this is #1.

Breeana C.
This was an amazing experience. My boyfriend and I went the first Saturday we were on the island. Captain Jay and the staff were so helpful and funny. It...

Stevie S.
Best part of our amazing trip!! The crew was very engaging and hilarious! We saw more then we could have possibly imagined with multiple snorkel locations.....

Myrna S.
The 4.5 hr dolphin snorkeling adventure was amazing. The staff Jeremiah & John were fantastic. We had a blast. Got to snorkle in 2 beautiful spots. Saw...

Aleister C.
Amazing experience! Definitely a must if this is your first time here. Lots of dolphins, turtles, all kinds of fish, and coral as far as you can swim. The...

Matt L.
My wife and I had a great time on the Lanai Dolphin Adventure. The dolphins weren't out that day, unfortunately, but the cruise was still very fun. Our...

Melissa S.
Absolutely great experience! We got on at the super last minute and are so grateful we did! Fantastic knowledgeable and fun crew, comfortable boat WITH...

Denyce S.
We had an epic whale watch today!! Whales and spinner dolphins ... could not have been much better. A whale came right up to the boat and another went under...

Carrie F.
We had an amazing whale watch with Maui Adventure Cruises! The boat is so fun and family friendly. We saw so many whales. Captain Kiwi and the naturalist,...

Maui, Hawaii Activity Blog
Blog,
10 Stops You Don’t Want to Miss On The Road To Hana
Blog,
Most Instagrammable Spots in Hawaii